I’ve been working in IT since the mid 1980s, spread across the aerospace, defence, science and financial services sectors. In the beginning I was mostly coding and testing, but as time went by I found myself working on requirements, designing systems and documenting them as much as doing any actual coding.

I first learned to program using Fortran on a VAX computer running the VMS operating system. Since then I’ve used all sorts of hardware and programming languages, even including a brief spell updating an ancient legacy system written in Algol running on an Elliott computer of late 1960’s vintage, for which the program was loaded from paper tape. This was an experience that gave me enormous respect for the programmers of the past for whom that was hi-tech.

Having worked on some extremely complex systems over the years I have come to value simplicity. When I am developing software for my own use my tool of choice these days is Gambas – an amazing but surprisingly little-known IDE, best described as “Visual Basic for Linux”, only Gambas is far superior to VB and leaves Python for dead in terms of productivity and performance.

Away from IT I am a musician – playing flamenco and blues guitar, and also the piano. In parallel with IT I’ve worked on the fringes of the art world, helping to organise four large-scale public art shows in recent years.

Although originally from London, I am blessed to live in rural South Shropshire, surrounded by farmland and arguably the most beautiful scenery the UK has to offer.

How did you become a LibreOffice enthusiast?

I started using GNU/Linux after years of frustration with the limitations and failings of Windows. My first distro was Xubuntu 8.10 which came with OpenOffice.org as its office software package. Until then I’d never heard of it, but it didn’t take long to discover that it had all the functionality that I’d ever used in MS Office, and a lot more besides.

When LibreOffice was launched as a fork of OO.org I jumped ship to it and have never looked back. I never cease to be astonished at how powerful and stable it has become. In my ideal world I would see Base become much more closely aligned with MS Access, in the way that the other components are close analogs for their MS Office counterparts. At the moment, any organisation with a sizeable investment in the use of Access is really not likely to migrate to LibreOffice.

What are you doing in the LibreOffice project at the moment?

Compared with most contributors I am a total lightweight. While my initial inclination was to get involved with developing the software itself, I felt daunted by the likely learning curve, given the size of the codebase, so it would be a long time before I could become really useful. I decided I might be more effective in helping to spread the word about LibreOffice.

I got myself added to the marketing mailing list and this has proven to be a great way to get involved. You get an inside view of the project and initiatives to expand the userbase. Crucially you get the opportunity to comment on these marketing activities and contribute any ideas you may have.

Recently I have been distributing flyers promoting LO around secondary schools and colleges of Further Education in my area, along with the local university campus. My car has a LibreOffice banner displayed in the windscreen. Every email I send includes a promotion for LibreOffice in the signature section. These are minor activities in the scheme of things, but as I see it if every LO user successfully encourages just one other person to try it some of those new users will inevitably be decision makers, in a position to bring many others on board. “From little acorns….” and all that. 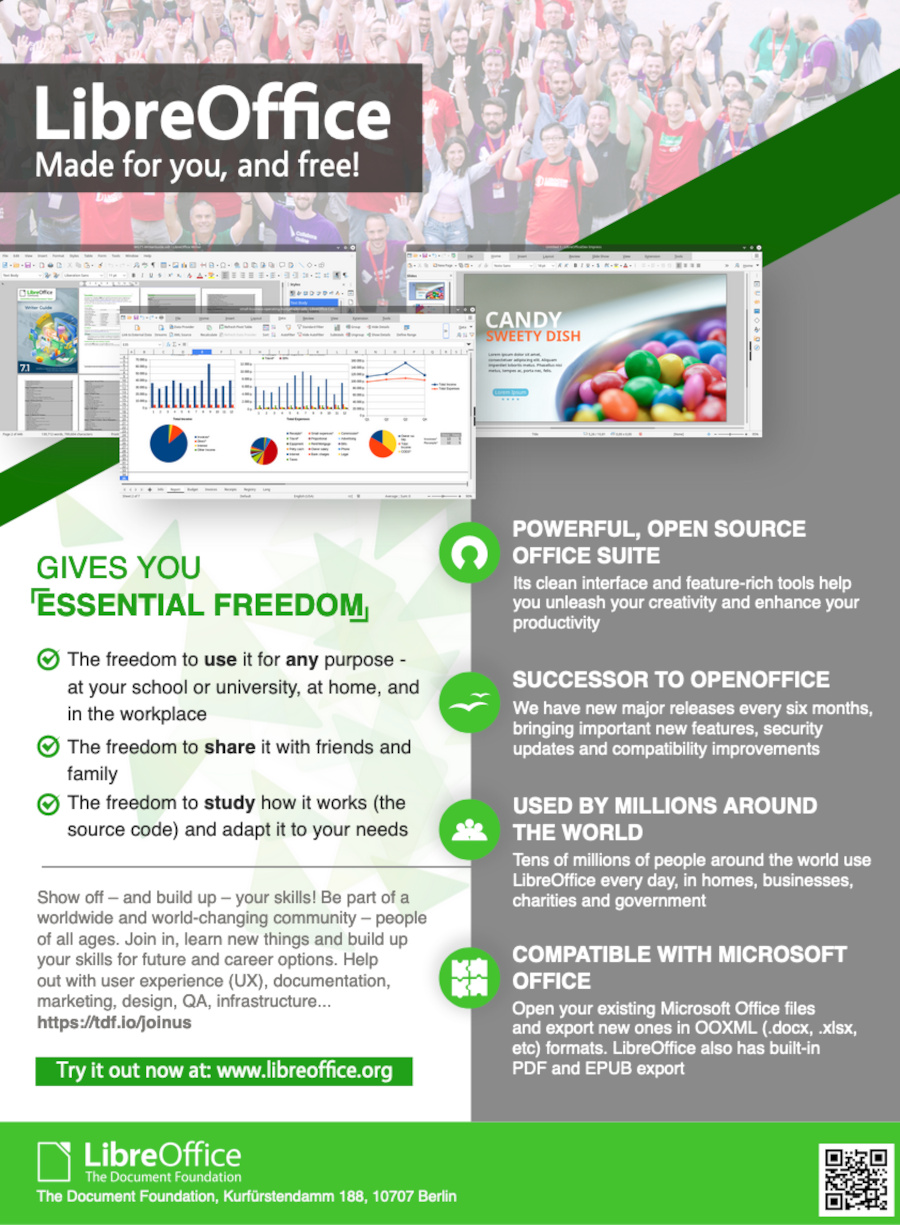 By putting myself forward as a LibreOffice point of contact I hope I will be able to help get some prospective new users “across the line”, by helping to resolve any questions or reservations which may be holding them back.

What are some of the challenges/opportunities with promoting LO and free software?

I feel the greatest challenge to the adoption of LibreOffice is simple resistance to change. In organisations where MS Office is already deeply entrenched, and possibly the only software many of their staff ever use at work, migrating from a tool they know very well to another which they may barely have heard of is a big ask. The bigger the organisation, the greater the task of migration is perceived to be. We have to persuade organisations that it is worth the effort.

A great opportunity where the UK is concerned is its highly dynamic business environment, which probably generates more startup companies than any other country in Europe. Some of these are highly professional, well-funded affairs but most involve only one or two people initially, seeking to create a business based on their skills and talents. With the bare minimum of funding and very little in their budget for software, this is where LibreOffice has great potential, if only ways can be found to reach people still in the planning stage of a new enterprise. This has the added advantage that if a startup includes LibreOffice in its workflows from day one, and that new business becomes a success, it is likely to stay with LO as it grows, thereby furthering its adoption. 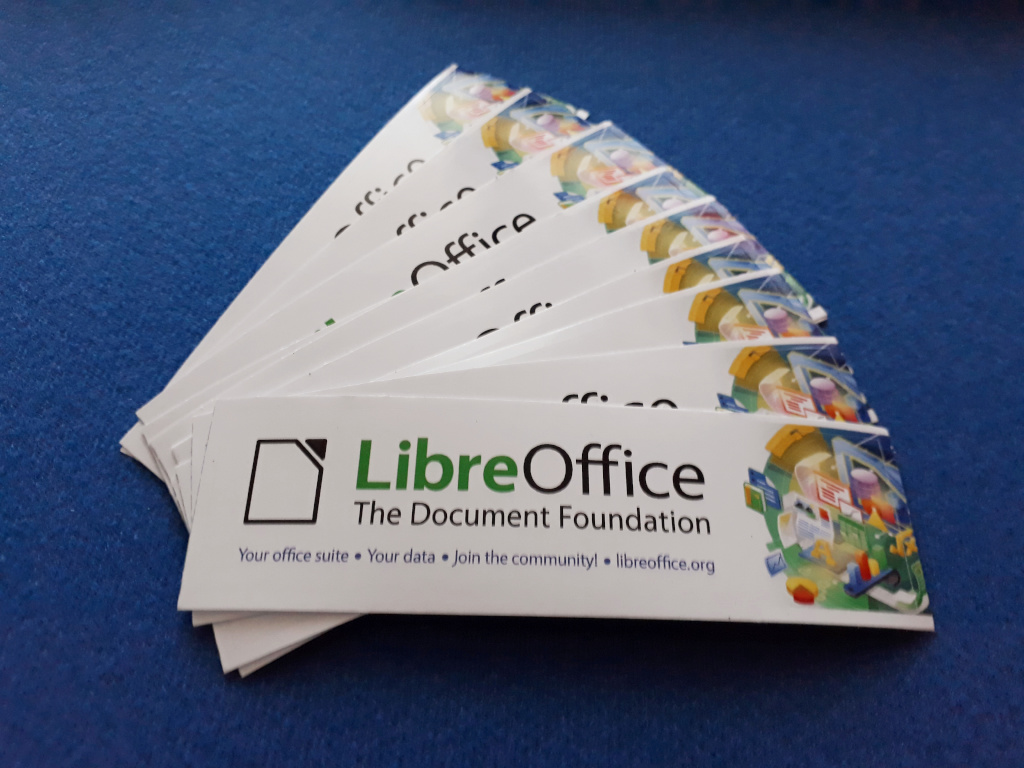 In my experience of advocating the use of free software, people usually “get” the advantages of open source. They are not difficult to explain. The additional advantages of free software, however, are a much harder sell. If you are not involved in software development they really don’t seem that relevant. Does that really matter, though, as long as the applications people use are indeed free and open source? Does it really matter if the motivation for choosing that free software is the concept of free as in “gratuit” rather than free as in “libre”?

At the level of day-to-day users I don’t think it does all that much, as long as their managers understand that somebody somewhere has paid for their “cost free” software to be developed, in terms of man hours of effort and/or hard cash, and that this can only continue if sufficient numbers of users express their appreciation in financial or other practical ways.

Thanks a lot to Nige for his time and contributions! Everyone is welcome to join our marketing project, mailing list and Telegram group. Let us know your ideas – and we can provide you with materials, to help spread the word!