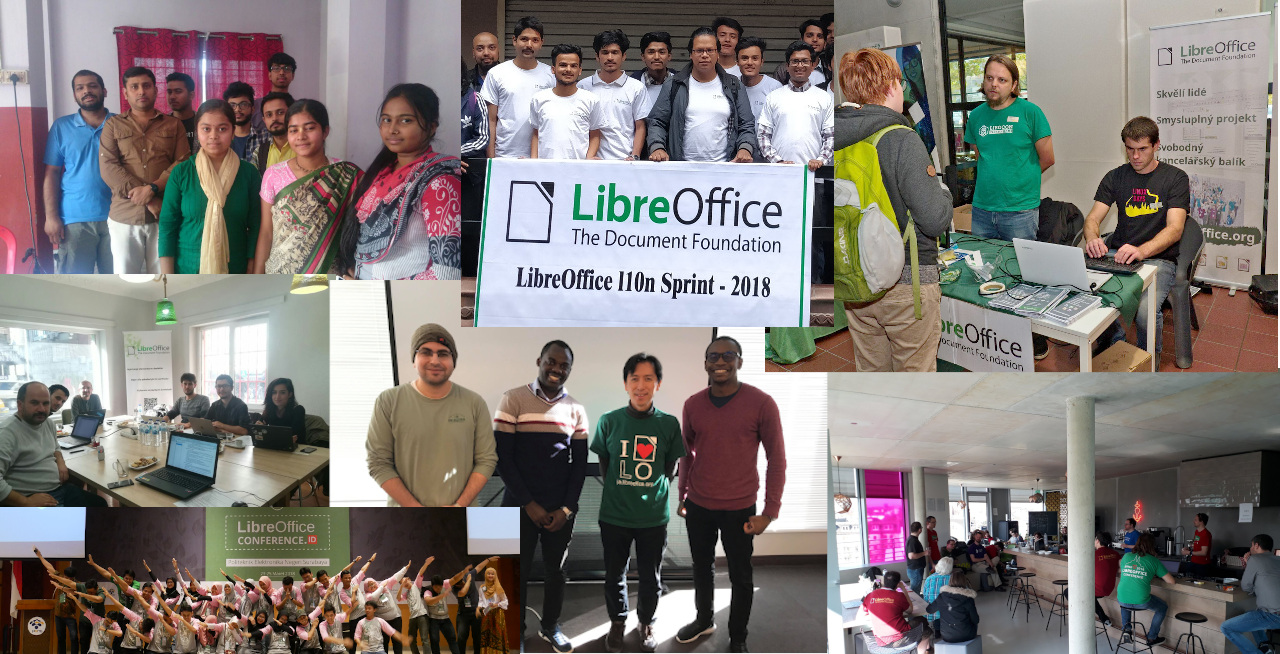 Community is awesome! By helping to translate and market LibreOffice around the world, native language projects bring enthusiasm and passion to the global community. Here’s what they did in 2018, taken from our Annual Report…

OSCAL is the annual international Open Source Free Software Conference in Albania dedicated to empowering Software Freedom, Open Knowledge, Free Culture and Decentralization. In 2018, some team, Membership Committee and Board members attended the event to meet local community members and discuss plans for the upcoming LibreOffice Conference 2018 (which is covered elsewhere in this report).

The GNU/LinuxDay event took place in Dornbirn, Vorarlberg, on 13th of October. Community members from LibreOffice and The Document Foundation were present, including Christian Lohmeier, Marina Latini, Florian Effenberger and Robert Einsle. They had a booth with various materials, and talked to visitors.

In January, the Brazilian community announced the availability of the Getting Started Guide 5.2, with all innovations and enhancements from LibreOffice 5.2. The guide was an in-depth update of the 5.0 Getting Started Guide that was already translated into Brazilian Portuguese. The translation team was composed of IT professionals, translators, engineers, teachers and technicians: Chrystina Pelizer, Vera Cavalcante, Fábio Coelho, Túlio Macedo, Raul Pacheco da Silva, Valdir Barbosa and Olivier Hallot.

In April, The Document Foundation supported the Cuban LibreOffice community, represented by Carlos Parra Zaldivar, for Document Freedom Day 2018 in Holguín, on the opening day of the International Book Exhibition in the local library Biblioteca Provincial “Alex Urquiola”. LibreOffice is included in the Cuban GNU/Linux distribution Nova, and as such is part of the IT syllabus in all schools.

During the last weekend of the year (December 28-30), there was a series of events at Middle East Technical University Northern Cyprus Campus, organized by the METU NCC ACM Student Chapter. Most of the attendees were from the Computer Engineering department. All attendees completed the “getting started” part of LibreOffice development, while some of them submitted their patches to Gerrit, and some began preparing to do so. 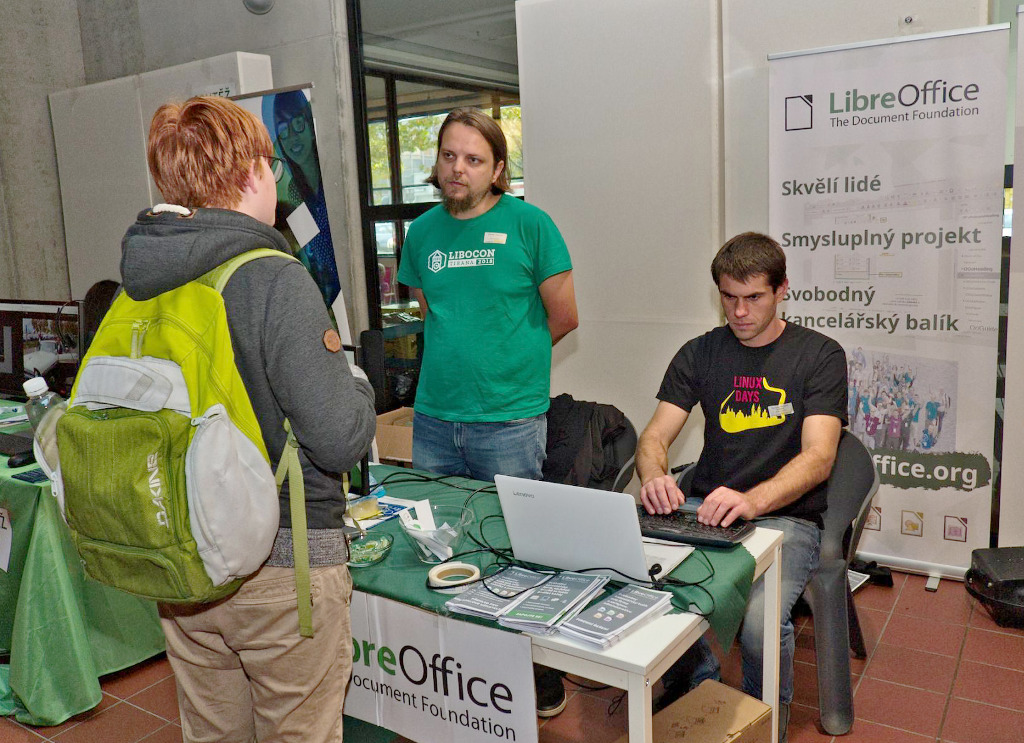 Zdeněk Crhonek and Stanislav Horáček attended the two biggest Czech FOSS events, LinuxDays in Prague and OpenAlt in Brno. There was generally positive feedback from users, interest in new features and what is going on. Also, there was discussion with someone from the National Technical Library in Prague (who enthusiastic about FOSS, migrated client computers to Linux and LibreOffice, and encouraging us to spread the word about it) and a representative of an organization trying to coordinate using FOSS in Czech municipalities (two towns running LibreOffice, with the intention to pay for some bug fixing).

Other meetups took place at these events: a meeting with the Slovak community (Miloš Šrámek and Andrej Kapuš) in Brno, a meeting with the Czech localization community (Mozilla, Linux distributions), discussing mainly the possibility of a new Czech dictionary, and a discussion with a marketing specialist who suggested ways to simplify the LibreOffice web page.

The French community organised workshops for documentation, QA, and localisation. Inno³ kindly supported one workshop by hosting the community at ‘Le 137’, a coworking space near Gare du Nord in Paris. Participants gathered at a restaurant near there and then went to work all together on QA and localisation. They worked on fixing bugs and localising LibreOffice Online. 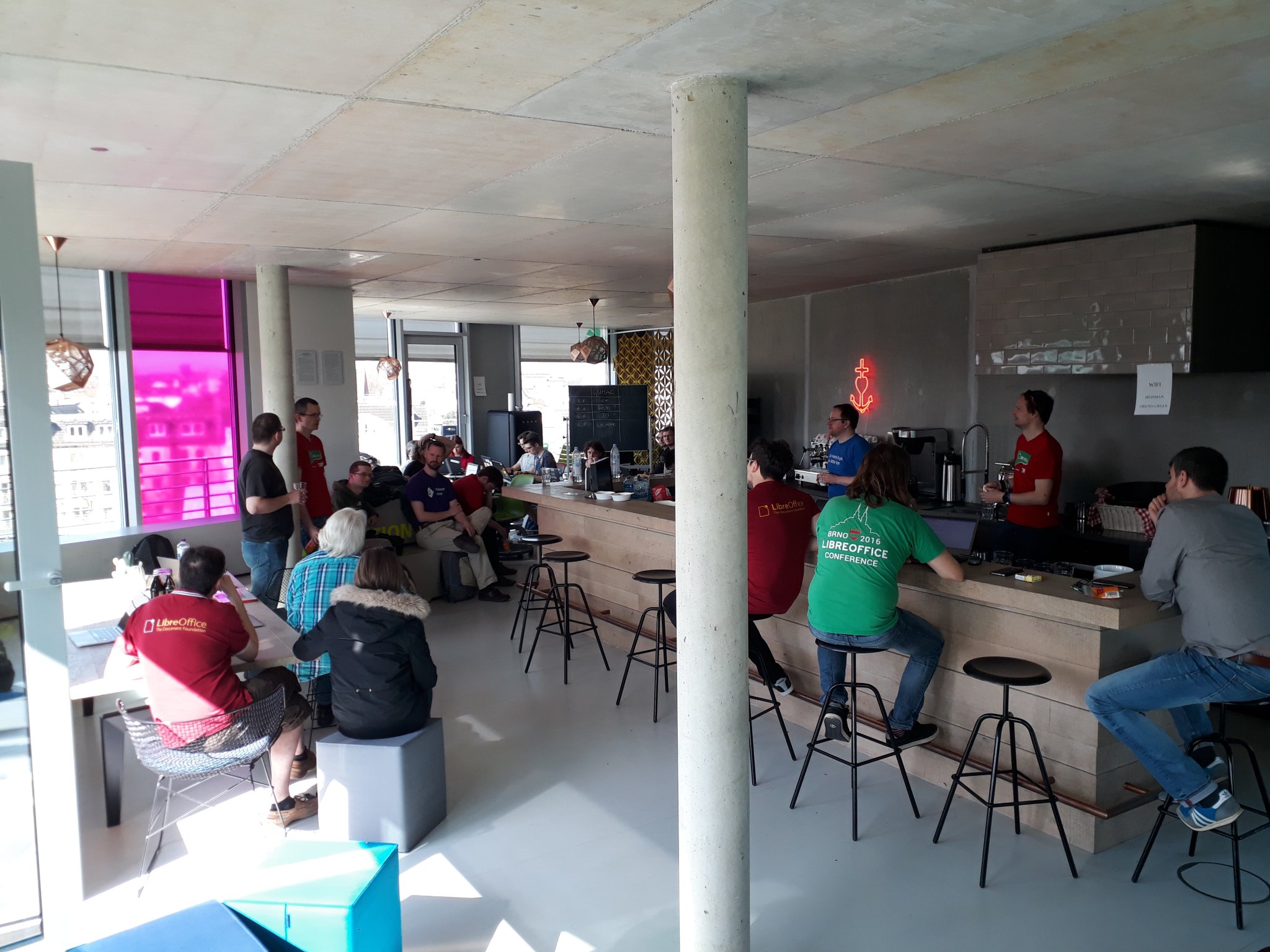 Christian Lohmeier (LibreOffice’s release manager) and Mike Saunders (Marketing & PR) attended the Augsburger Linux-Infotag in southern Germany in April. They set up a booth which had a screen showing a video of LibreOffice 6.0, along with stickers and flyers encouraging people to get involved with the project. Mike gave a talk in German called “LibreOffice: where we’re from, where we’re going, and how to get involved”.

Up in northern Germany, the community had a meetup in Hamburg to discuss various ideas and issues in the project, such as attending more conferences in the German-speaking region, with a more targeted focus. For instance, instead of simply telling people what LibreOffice is (which most Linux users already know), the focus should be more clearly on bringing in potential new contributors. Some some “action items” were also defined, including the creation of a new “Get involved” flyer for events, and a German translation of the “Get involved” page on the website.

On November 13th, Florian Effenberger gave a presentation about The Document Foundation at HTW Dresden – a university for technical and scientific studies. This was part of a series of talks about free and open source software.

In addition, the German community organised regular calls (TelKos) to discuss upcoming events and ways to spread awareness about LibreOffice. 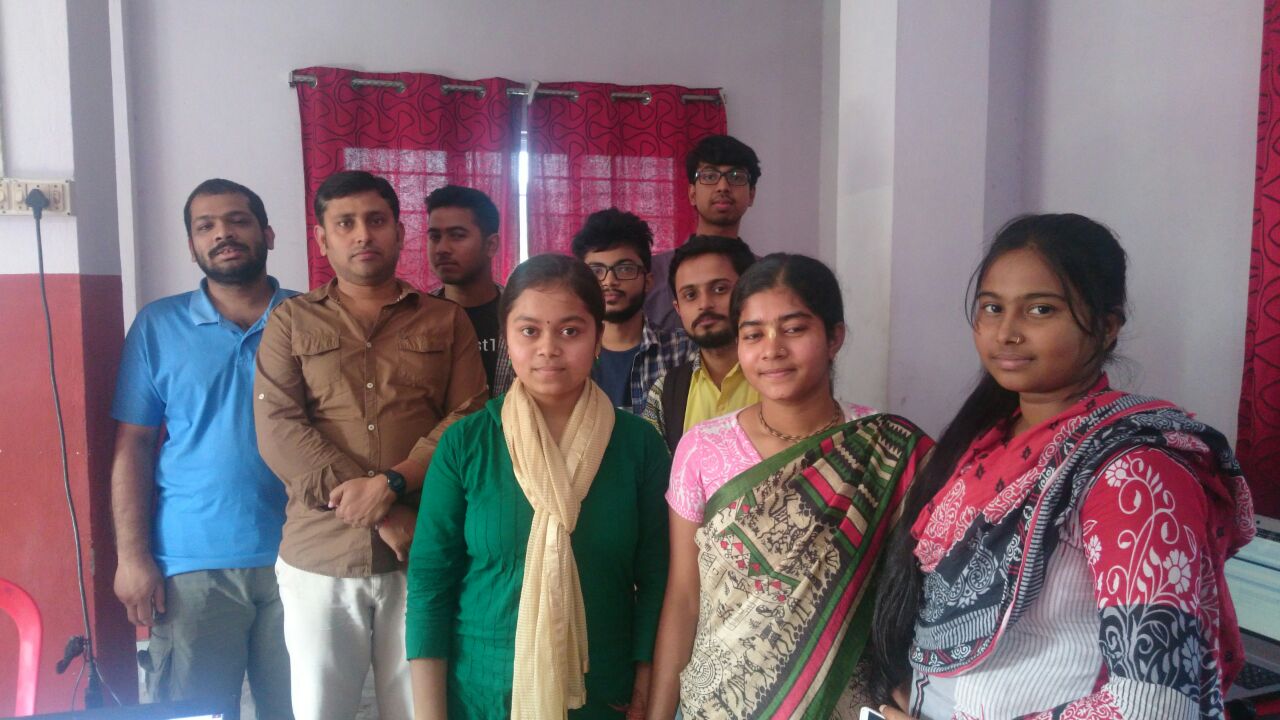 The main event started with introductions, then they had a short recap on the pre-meetup. Following that was hands-on portal. Biraj showed the style guide of the bn-IN locale translation, which is followed in open source localisation. Then the sprint started, which was almost five hours long. Biraj summed it up with: “it was good and productive. Of course, it was fun too!” 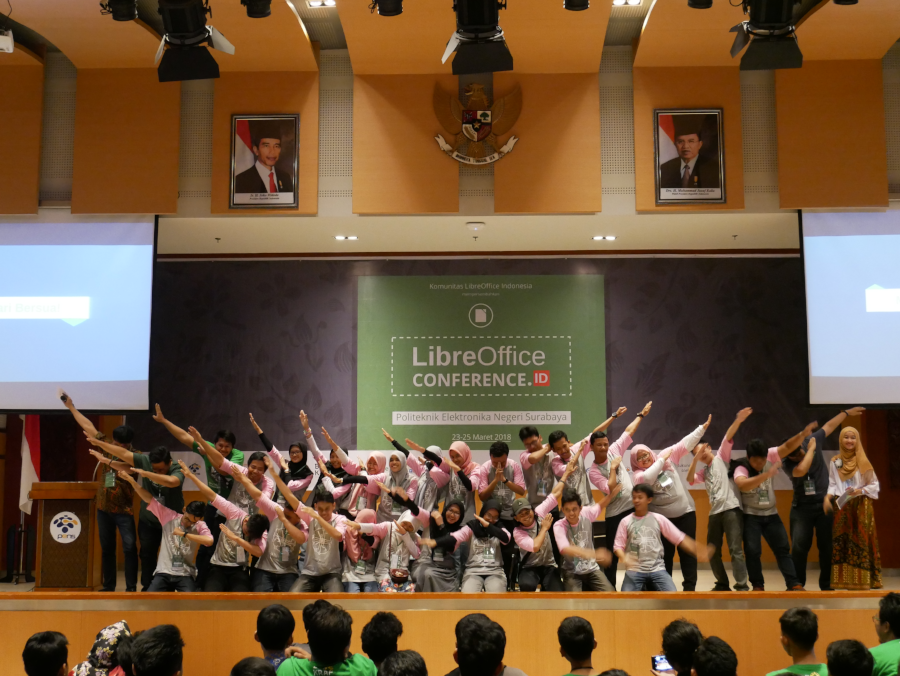 On the first day of the conference, in the morning. there was a meeting with a group of PENS’ IT professors, led by the university dean, where discussions took place about the opportunity of increasing the presence of open source software in their syllabus. In addition, the university is going to evaluate the migration to open source software and LibreOffice, including the migration to ODF as a way to overcome vendor’s lock-in.

Associazione LibreItalia, representing the Italian LibreOffice community, organized several events targeted at students – from primary schools up to universities – to educate them about free open source software and open document standards, and support the concept of “digital citizenship”. Several community members have been active in Northern and Central Italy, and have also targeted their communication efforts to parents.

In November, the community met in Sanremo for the fifth LibreItalia Conference, to discuss past activities and arrange new ones. The event was also an opportunity to meet the President of PA Social, the association representing social media managers of Italian public administrations, to talk about potential collaboration opportunities. 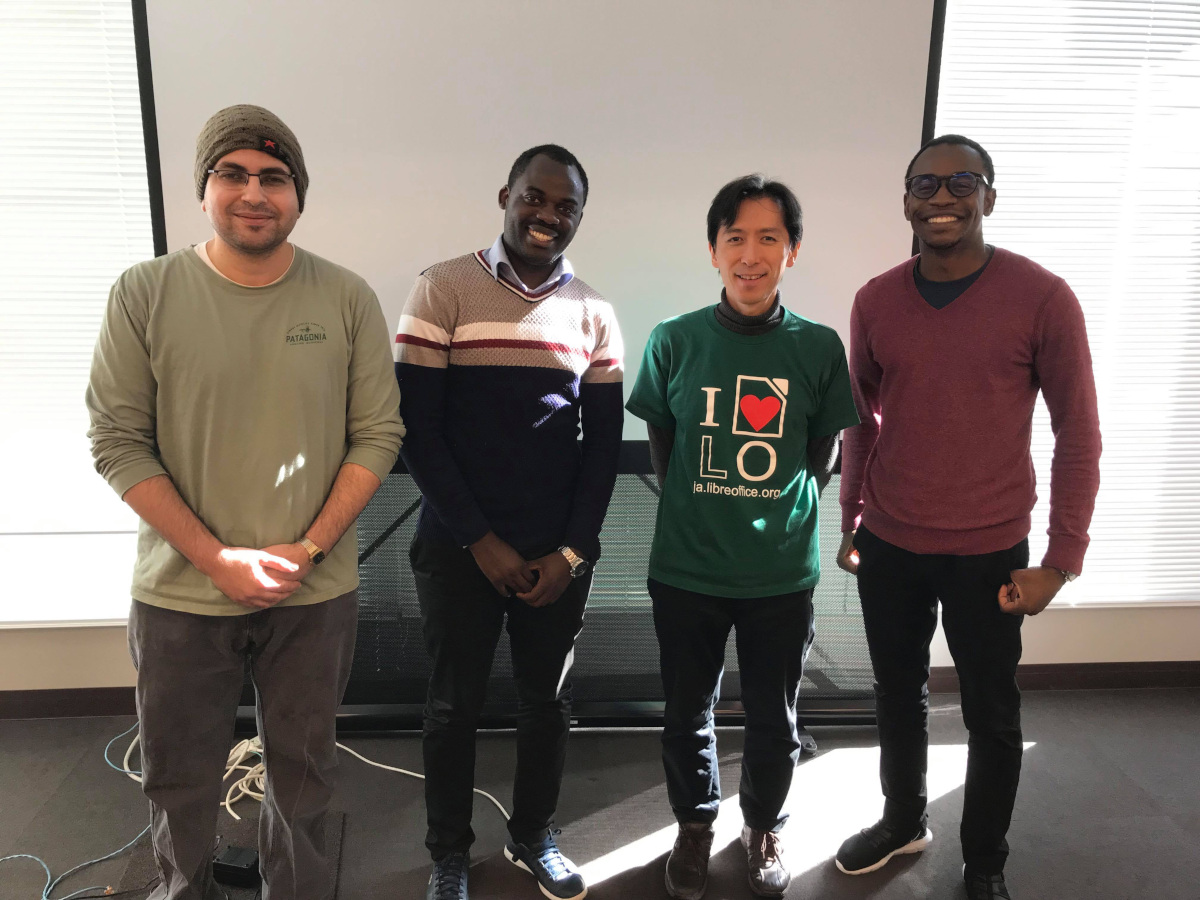 On 13th December, at the Yahoo! Lodge (1-3, Kioi-cho, Chiyoda-ku, Tokyo), LibreOffice community members who are usually far away from one another met up for a chance to interact. At this event, participants had a question-and-answer session about translations, discussed some other topics, and prepared slides for the following day. Attendees included: Naruhiko Ogasawara, Shinji Enoki, Masaki Murakami Tomas Kapiye (from Namibia), Dieudonne Dukuzumuremyi (Rwanda), Hatem Wasfy (Egypt) Rin Nakamura and Atsushi Ueda.

On the following day, the LibreOffice Japanese team did a seminar. This time, the speakers were Tomas Kapiye, Dieudonne Dukuzumuremyi and Hatem Wasfy. One of the talks was about “How African students contribute to LibreOffice”.

During the year, Japanese community members contributed articles to websites and online magazines about their events, and new versions of LibreOffice. 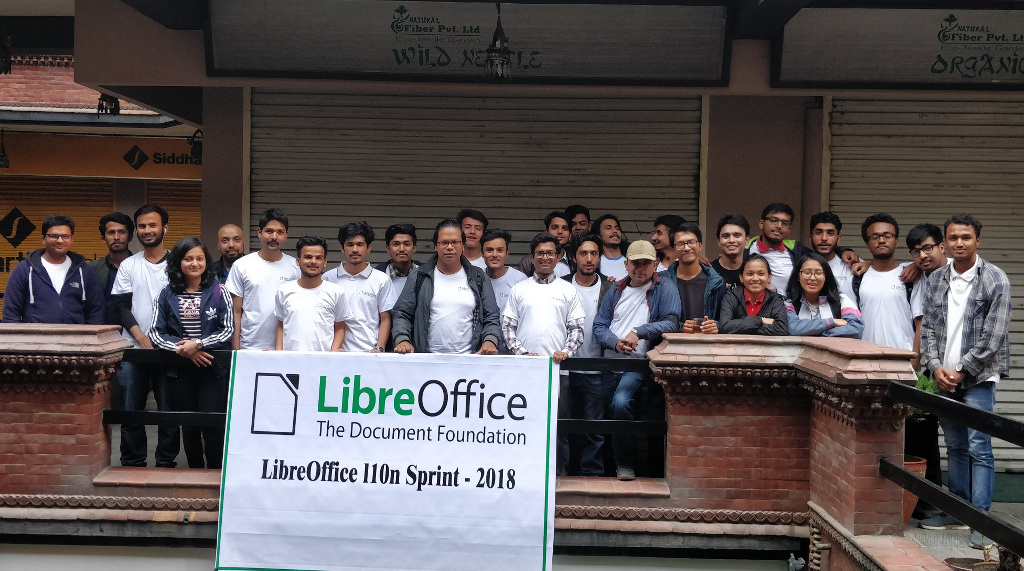 The Nepalese LibreOffice community spent much of April 2018 localising the software, and at the end of the month, they had a meetup together with the Kathmandu University Open Source Club. For translations of LibreOffice, participants reduced the number of critical error strings from over 9000 down to 3808, while LibreOffice Online was completely localised during this event. In addition, the number of active contributors increased from 2 to 35. At the end of the event, participants received a certificate, thanking them for their help.

Many local LibreOffice communities have Telegram channels for communication. The Spanish Telegram channel was featured in MuyLinux online magazine; this brought a sizeable influx of new members and traffic. 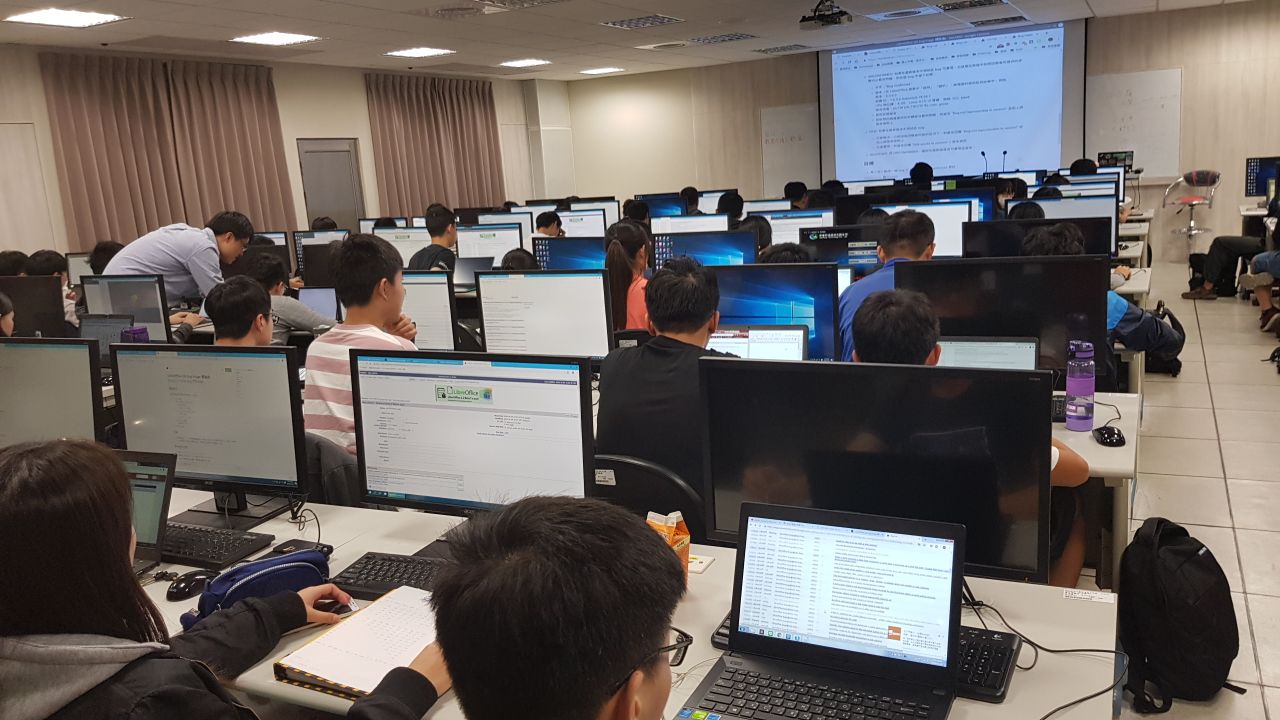 A meetup was held in the evening on 11 August in A+A space, which is a nice and friendly space for FOSS communities, and also a community made up of several artists who use FOSS as their tools to create their artwork. The attendees included LibreOffice and other FOSS community members from Japan, Korea, Indonesia and Taiwan. Franklin Weng introduced the 30-second animation for LibreOffice Android Viewer, which was generated by LibreOffice Taiwan and A+A Space.

Rania Amina, who was responsible for visual design in the LibreOffice Conference Indonesia, showed his artwork to attendees, while Ahmad Haris also shared his experiences holding LibreOffice Conference Indonesia, which was a huge success. Shinji Enoki described the current status of Japanese support in LibreOffice, and many events held in Japan. Daehyun Sung introduced himself and shared some interesting things in Korea.
After this, attendees split into different groups and talked with each other. During this meetup, members from Japan and Indonesia showed interest in holding a LibreOffice Asia Conference. Besides conferences, attendees also exchanged experiences migrating to LibreOffice in organizations and public administrations.

On November 29, the Taiwanese community held a three-hour “LibreOffice Bug Triage Experience” event. A total of 70 students from National Cheng-Kung University and three members of The Document Foundation (Franklin Weng, Cheng-Chia Tseng and Jeff Huang) attended. First, Franklin introduced Bugzilla and the bug issue lifecycle. In this event the participants installed the daily build master version of LibreOffice and focused on three things: testing new reports, confirming bugs, and reproducing issues.
Students searched for these three kinds of bugs and randomly chose one to examine. The three TDF members helped and guided students during the whole session. In a short time, students found that it was a lot easier than they expected, so they were quite happy, excited and confident. The organisers estimate that in total, more than 100 bugs were confirmed/reported as not reproducible. 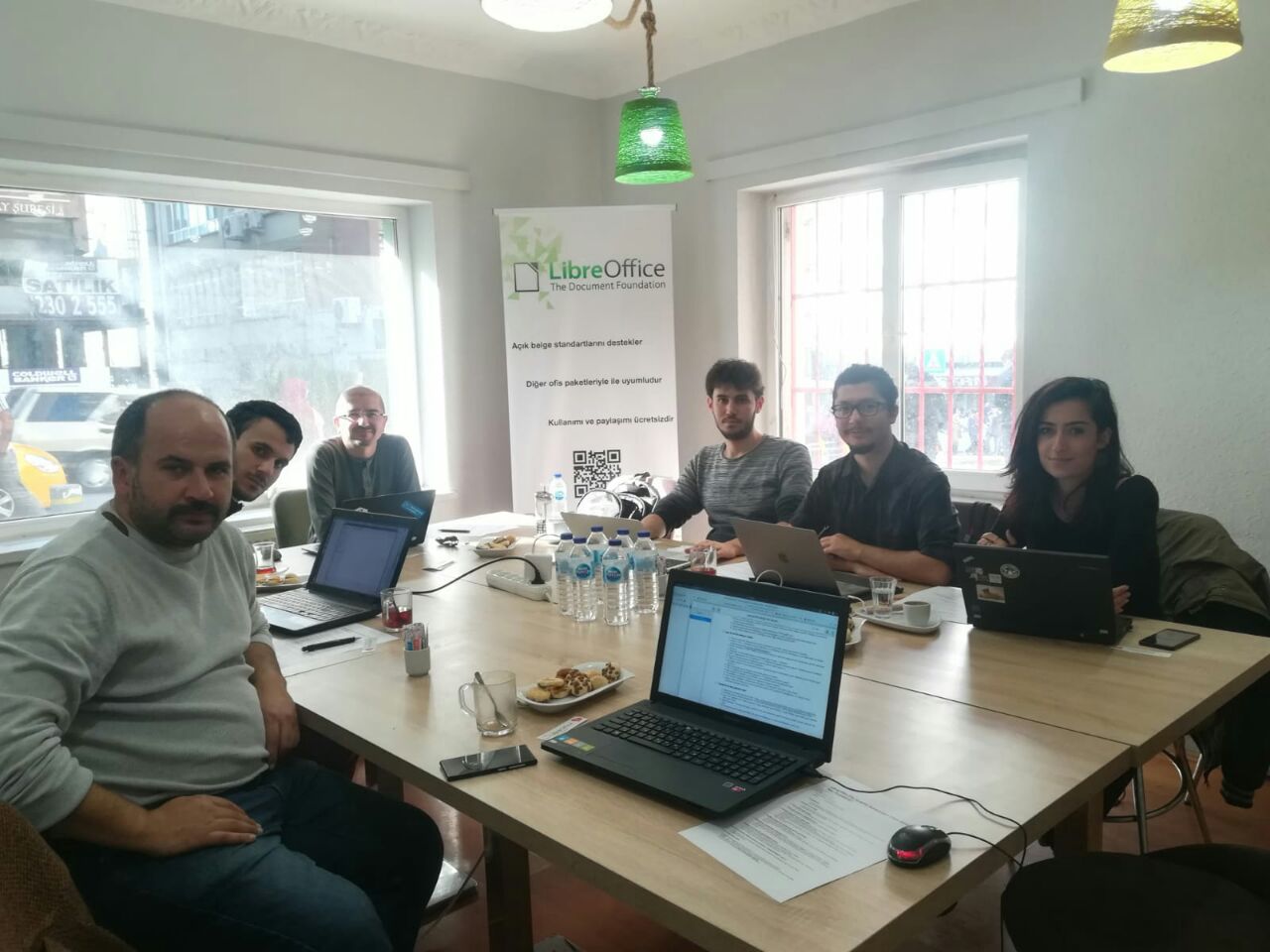 In May, members of the Turkish community attended the Free Software and Linux Days 2018 in Istanbul. They had a booth, jointly run by LibreOffice Turkey and GNOME Turkey community members. During the event they gave out stickers to the visitors, and answered their questions about LibreOffice, GNOME, and Free/Libre Software in general. Community members also had a lot of time to chat, and to discuss the current situation and the future of the community in Turkey. Also at the event, attendees gave three talks: Being a LibreOffice Developer, LibreOffice Certifications, and The Open Document Format.

A couple of months later, the community organised a Bug Hunting Session for LibreOffice 6.1 Release Candidate 1, to find and fix issues before the final release in early August. Around 15 people were present, and they tested LibreOffice for three hours. Multiple bugs were discovered – some were reported, some were discussed, others were prepared for reports later. After the session, there was a long discussion about community and ecosystem building for LibreOffice in Turkey.

A second Bug Hunting Session took place in Ankara in November: eight people (including one remotely from Istanbul) participated in the live session, and participants tested LibreOffice 6.2 Alpha on Linux, Windows and macOS. The event started with self-introductions, and participants chatted for a short while, to get to know each other. Then Muhammet Kara, the organiser, went through the bug reporting and QA process briefly, and introduced the participants to LibreOffice’s Bugzilla installation. Several bugs were identified, and bug reports were created for them.

Lastly, Gökhan Gurbetoğlu organised some LibreOffice training in October. It was a two-day event and took place in İstanbul, as part of the Open Source in Public Institutions Conference’s local sessions (Kamu Açık Kaynak Konferansı). There were 25 trainees on both days; the first day started with a quick introduction to LibreOffice’s interface and continued with Writer. Then the second day was for Calc. 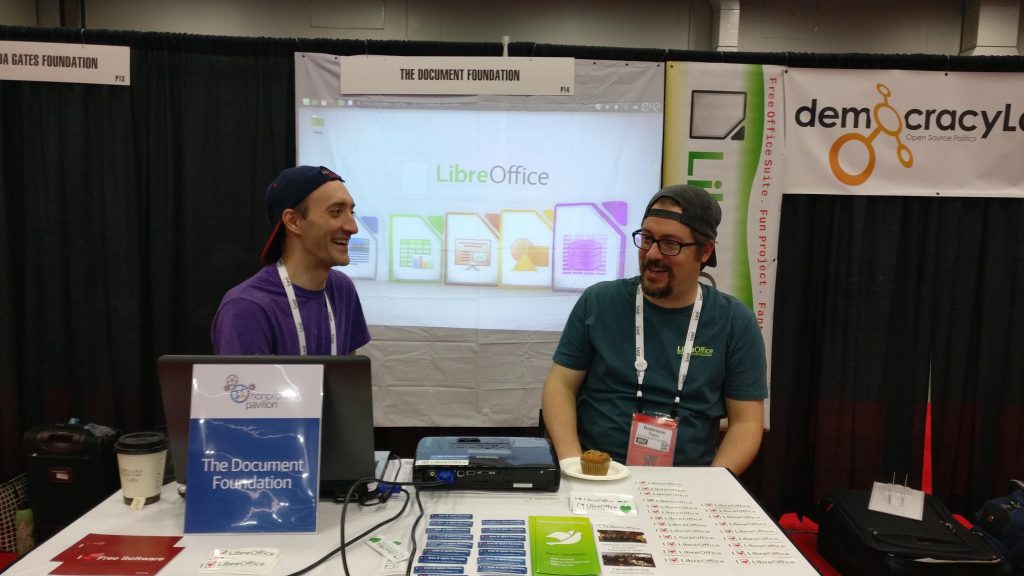 OSCON is the largest open source conference and exhibition in the United States. The event returned to Portland to celebrate its 20th anniversary in July, after a couple of years in Austin, Texas. The Document Foundation was given a free booth in the Non Profit Pavilion, and was represented by three enthusiastic volunteers – Robinson Tryon and Robin Haberman from the US, and Eric Bright from Canada – who had lots of good conversations with everyone from long-term users and supporters of LibreOffice, to those who were new to the whole concept of FOSS.

Of course, this report contains just a selection of native language project achievements in 2018 – so TDF would like to say a big thank you to everyone, across the planet, who is helping to make powerful productivity tools available to everyone, regardless of their location or mother tongue. Cheers!