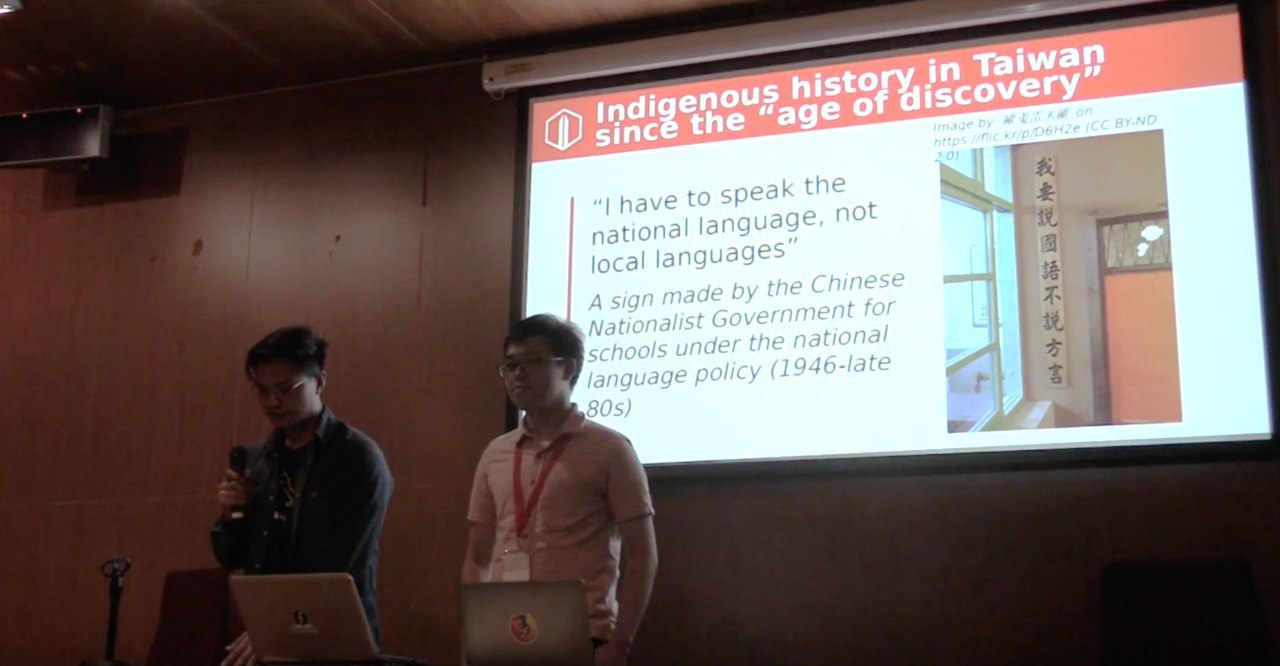 Lin and Wang in the LibreOffice Conference 2019. The Chinese words in the photo in slide marks: “I have to speak Chinese, not local languages.

Foreword: At the LibreOffice Conference 2019, two young people from Taiwan, Kuan-Ting Lin and Xiao-Wu Wang, gave a wonderful talk called “Making LibreOffice a lifesaver for dying languages in Asia”. (Video of the talk is at the end of this blog post.) It covered their work and plans for saving indigenous languages in Taiwan, and what an important role LibreOffice can play here.

Like many indigenous or native people around the world, the indigenous Taiwanese people have been excluded from contemporary technology for decades. During the rapid development of personal computers between the 1960s and 1980s, the indigenous people were suffering from the “national language” policy, which banned all indigenous languages and discourse promoting Chinese identity in school. That is the reason that the earliest Chinese input method for computers was invented before 1976, but there were no equivalents for indigenous languages until the late 2000s.

As smartphones boomed in this decade internationally, more and more indigenous people gained access to the internet mobile apps as, like other people do Taiwan. But the majority of the digital resources are still in Chinese: online news articles, educational materials, translation systems, digital government services, medical information, chat forums, and many more. Almost all of them are not available in the indigenous languages.

Maybe Taiwan has done a lot for indigenous rights, but as members of the indigenous community and students of anthropology here, we think there is still huge room for improvement. The input system is the first step. Typing has been difficult for indigenous people as sentences are treated as English – hence tons of red underlines indicating spelling or grammatical “mistakes” identified by various office software brands in the market. Therefore, making indigenous dictionaries for the apps to remove the underlines has become the top priority of our work.

Furthermore, the system must be appealing for people to type in their own indigenous languages. It needs to be smart enough to correct grammar, if possible, and spelling. Being able to do so can empower the elderly to use new technology and to align their spelling with the official dictionary as long as they want to. New language learners will benefit from this system, since they don’t need to look up in dictionaries when typing as often.

After our research, we understand that Microsoft not only discourages people to type in indigenous languages in Microsoft Office – by failing to implement such support in the software suite – but also distance people from their mother tongue by restricting modifications to Office with its proprietary software license.

On the contrary, the LibreOffice community discovered this problem years ago and has been tackling it thanks to its open source development, and its appreciation of diverse values. For example, LibreOffice was translated to Guarani to address a similar issue in South America. In Taiwan, community members like Mark Hung have started to build databases for indigenous languages, too.

Working with the youth communities of indigenous people, we are able to extend the project to another level: local participation. We want this project to be an important point of revitalization of indigenous culture, and it can be applied in everyday life. We invite youngsters from all the indigenous communities, and connect them with the LibreOffice community. With such an idea, the LibreOffice community can also benefit from new perspectives and views of different people, and can get a huge group of new and enthusiastic users and promoters.

The project is also good for the government. The central government of Taiwan is both struggling with its OpenDocument Format/LibreOffice policy and the “official documents in indigenous languages” policy. For public servants, everyday tasks seem to have made them reluctant to learn new things – both dying languages and new software. We hope that combining the two will make it easier for people to adapt new and meaningful policies.

We received so many words and a lot of help from our friends in the LibreOffice community around the world before, during and after the LibreOffice Conference 2019 in Almería, Spain. Our Taiwanese folks, including Franklin Weng and Eric Sun, introduced this wonderful opportunity for us to get to know this community. Mark Hung, Gustavo Pacheco, Eike Rathke and Cheng-Chia Tseng generously provided their precious knowledge and experiences. Shinji Enoki, Jeff Huang and many friendly LibreOffice community friends gave us their sincere encouragement and suggestions. We are so lucky to work on this important issue with these lovely people!

If you agree that this is worth doing, please join us! We’d love to see new participants from various backgrounds. For inquiries, participation, questions or suggestions, just send an email to a @ cssjh . com (Kuan-Ting). We appreciate your interest and support!

And as mentioned, here’s the video of the presentation from the conference: