If you haven’t heard of the Document Liberation Project (DLP) before, we made a short video explaining what it does and why it’s important. In summary: it supports development of software libraries to read documents from many (usually proprietary) applications. If you’ve ever opened a file generated by Apple Pages, WordPerfect or Microsoft Works in LibreOffice, you’ve benefitted from the hard work of the DLP team. And DLP libraries are used in many other prominent FOSS tools such as Inkscape and Scribus as well.

For example, here’s a file being created in Apple Pages, and the same file being rendered in LibreOffice thanks to DLP libraries (click for a bigger version): 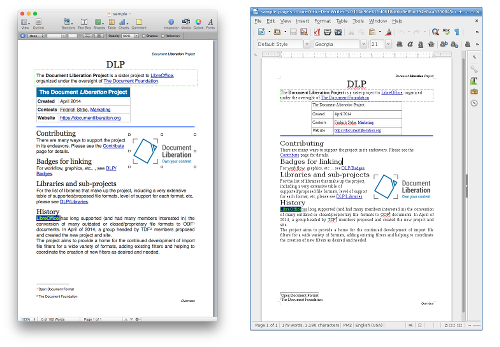 So, what has been going on in the DLP so far this year? Here’s an overview.

In January, libetonyek 0.1.6 was released with a bunch of new features. This library, which helps applications to read files produced by Apple Keynote, Pages and Numbers, can now properly parse links, lists and text languages in Keynote 6 files, while resizing of tables is handled properly. Text containing non-ASCII characters (ie, the majority of non-English languages) is now managed much better as well.

Scribus 1.5.1 was released in February, as part of the development process towards a stable 1.6 release of this desktop publishing tool. Along with many new features and updates, Scribus 1.5.1 makes use of the libfreehand 0.1.1 library, which allows it to read documents created in Adobe FreeHand. This feature is still marked as experimental – as it’s very early days – but is already working well and will be very useful to some Scribus users.

In order to make the goals of the Document Liberation Project clear and accessible, and attract potential new contributors, we redesigned the front page of the DLP website. We broke up the big chunks of text that used to dominate the front page, and added logos and links to several projects that use DLP libraries. 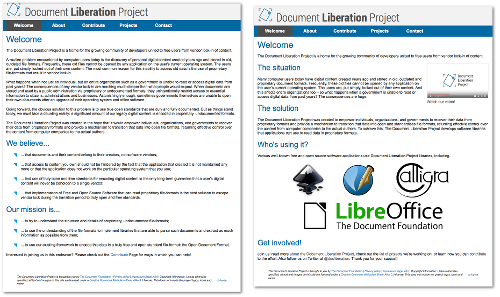 In addition, we added a link to the aforementioned video that describes DLP and tries to make it accessible to a wider audience. As more and more computer users recognise the downsides of non-standard file formats and vendor lock-in, projects like the DLP will become increasingly important.

DLP is always looking for new contributors, and appreciates all help with coding, testing and documentation. If you enjoy programming and tackling new challenges, creating a new import library can be especially rewarding! Fathoming out the insides of a closed file format is fascinating, and you’ll get plenty of appreciation from users in the future who can finally open their old documents without struggling to run ancient software in a virtual machine…

So to join, visit the contributor page for pointers to get started.