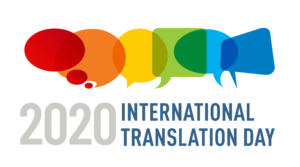 International Translation Day is an international day celebrated every year on September 30 on the feast of Saint Jerome, the Bible translator who is considered the patron saint of translators. The celebrations have been promoted by International Federation of Translators (FIT) ever since it was set up in 1953. In 1991 FIT launched the idea of an officially recognized International Translation Day to show solidarity of the worldwide translation community in an effort to promote the translation profession in different countries. This is an opportunity to display pride in a profession that is becoming increasingly essential in the era of progressing globalization. In line with the celebration of 2019 as International Year of Indigenous Languages, the theme for 2020 is “Finding the words for a world in crisis”.

We celebrate our community of translators, which is providing LibreOffice in 119 different languages (with other 26 hopefully becoming available in the future), more than any other software, fulfilling one of the most important objectives of The Document Foundation: “to support the preservation of mother tongues by encouraging all peoples to translate, document, support, and promote our office productivity tools in their native language”. Today, there are over 4 billion people in the world who can use LibreOffice in their native language, and this is an achievement which deserves a recognition.