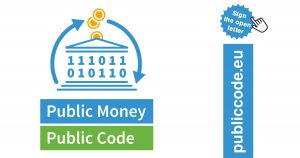 Digital services offered and used by public administrations are the critical infrastructure of 21st-century democratic nations. To establish trustworthy systems, government agencies must ensure they have full control over systems at the core of our digital infrastructure. This is rarely the case today due to restrictive software licences.

Today, 31 organisations are publishing an open letter in which they call for lawmakers to advance legislation requiring publicly financed software developed for the public sector be made available under a Free and Open Source Software licence. The initial signatories include CCC, EDRi, Free Software Foundation Europe, KDE, Open Knowledge Foundation Germany, openSUSE, Open Source Business Alliance, Open Source Initiative, The Document Foundation, Wikimedia Deutschland, as well as several others; they ask individuals and other organisation to sign the open letter. The open letter will be sent to candidates for the German Parliament election and, during the coming months, until the 2019 EU parliament elections, to other representatives of the EU and EU member states.

“Because the source code of proprietary software is often a business secret, it radically increases the difficulty of discovering both accidental and intentional security flaws in critical software. Reverse engineering proprietary software to improve or strengthen it is an absolute necessity in today’s environment, but this basic technical requirement is unlawful in many circumstances and jurisdictions. With critical infrastructure such as hospitals, automobile factories, and freight shippers having all been brought offline this year due to flaws concealed within proprietary software, unauditable code is a liability that states can no longer subsidize with special legal privileges without incurring a cost denominated in lives.

Right now, the blueprints for much of our most critical public infrastructure are simply unavailable to the public. By aligning public funding with a Free Software requirement — “Free” referring to public code availability, not cost — we can find and fix flaws before they are used to turn the lights out in the next hospital.” says Edward Snowden, President of the Freedom of the Press Foundation about the “Public Money Public Code” campaign launch. 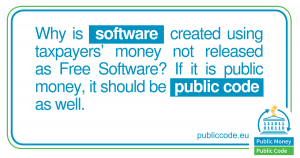 Public institutions spend millions of euros each year on the development of new software tailored to their needs. The procurement choices of the public sector play a significant role in determining which companies are allowed to compete and what software is supported with tax payers’ money. Public administrations on all levels frequently have problems sharing code with each other, even if they funded its complete development. Furthermore, without the option for independent third parties to run audits or other security checks on the code, sensible citizen data is at risk.

“We need software that fosters the sharing of good ideas and solutions. Only like this will we be able to improve digital services for people all over Europe. We need software that guarantees freedom of choice, access, and competition. We need software that helps public administrations regain full control of their critical digital infrastructure, allowing them to become and remain independent from a handful of companies,” says Matthias Kirschner, President of the Free Software Foundation Europe.

That is why the signatories call on representatives all around Europe to modernise their digital infrastructure to allow other public administrations, companies, or individuals to freely use, study, share and improve applications developed with public money. Thereby providing safeguards for the public administration against being locked in to services from specific companies that use restrictive licences to hinder competition, and ensuring that the source code is accessible so that back doors and security holes can be fixed without depending on only one service provider.

“Public bodies are financed through taxes. They should spend funds responsibly and in the most efficient way possible. If it is public money, it should be public code as well!”, says Kirschner.