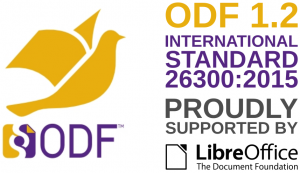 Berlin, July 17, 2015 – The Open Document Format for Office Applications (ODF) Version 1.2, the native file format of LibreOffice and many other applications, has been published as International Standard 26300:2015 by ISO/IEC. ODF defines a technical schema for office documents including text documents, spreadsheets, charts and graphical documents like drawings or presentations.

“ODF 1.2 is the native file format of LibreOffice. Today, ODF is the best choice for interoperability, because it is widely adopted by applications, and is respected by applications in every area”, says Thorsten Behrens, Chairman of The Document Foundation. “ODF makes interoperability a reality, and transforms the use of proprietary document formats into a relic of the past. In the future, people will tell stories about incompatible document formats between two releases of proprietary office suites, as a bygone problem”.

ODF is developed by the OASIS consortium. The current version of the standard was published in 2011, and then was submitted to ISO/IEC in 2014. The standard is available – in three parts: schema, formula definition and packages – from the repository of Publicly Available Standards as a free download from the following links:

The standard is also available from the OASIS ODF TC website, from the page at the following address: http://docs.oasis-open.org/office/v1.2/OpenDocument-v1.2.html.

ODF 1.2 is supported by all the leading office suites, and by a large number of other applications. It has been adopted by the UK Cabinet Office as the reference for all documents exchanged with the UK Government, and is currently proposed as the reference standard by the Référentiel Général d’Interopérabilité 1.9.9 of the French Government. In addition, ODF 1.2 has been adopted by many European public administrations. In Brasil, ODF is part of the Progranma do Governo Eletrônico (e-PING) and can be accessed at this link: http://eping.governoeletronico.gov.br/#p2s3.