Fonts are one of the main culprits of LibreOffice interoperability problems with Microsoft Office documents, when viewed from the end user’s point of view. In fact, Microsoft Office document are often using one of the default fonts – either the old “Core Fonts for the Web” (deprecated in 2002, but still in use) or the new “ClearType Fonts” (launched in 2000, and now adopted by Windows and Office) – which are not always available in LibreOffice, as they are proprietary and cannot be distributed with open source software. Also, in the case of ClearType fonts, the license is strictly connected to the Windows and/or Office license, so to legitimately use them with LibreOffice you need a Windows license where they are included.

When LibreOffice opens a Microsoft Office document, it will replace the fonts which are not available with one of the default Liberation fonts, which are metrically compatible with Arial (Liberation Sans), Courier New (Liberation Mono) and Times New Roman (Liberation Serif), but will have an impact on the visual appearance of the document if they replace a different font (in this case, the user will usually start to complain loudly about LibreOffice, without even checking if the contents are still there…).

To reduce the impact of this problem, which cannot be eliminated, at least until users stop using fonts creatively, LibreOffice offers a specific feature, a font replacement table that can be configured according to the user’s needs, and is among the program’s options. If the table is configured correctly, LibreOffice replaces the fonts with those metrically compatible – or simply more similar – defined by the user, and this in most cases will prevent the document from looking different. Luckily, there is a large number of free open source fonts available, with some specifically developed to replace Microsoft fonts as in the case of Croscore Fonts, from several online repositories. I suggest Google Fonts, as the website provides not only the font files but also all the associated legal resources, including the license. 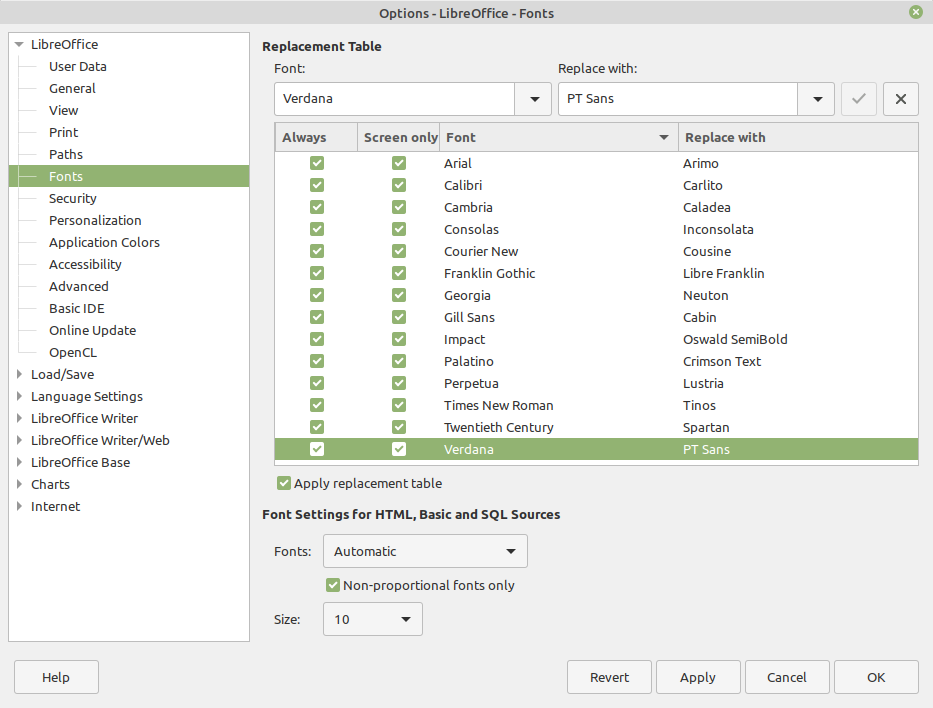 Installing fonts is rather easy, but for those who are not familiar with the procedure there are a couple of articles which provide a quick tutorial: Windows & macOS, and Linux.